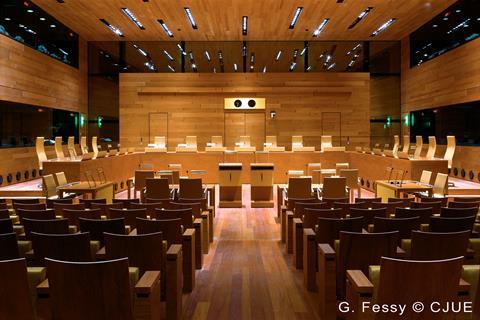 Source: Court of Justice of the European Union

Small courtroom in the CJEU

The case concerned two asylum seekers detained in the Röszke transit zone on the Hungary-Serbia border, pending their appeals against their expulsion to their countries of origin. The Hungarian authorities had refused entry to the applicants based on the fact that they had passed through Serbia before arriving in Hungary, which refusal was based on Hungarian legislation providing that Serbia was a ‘safe transit country’ and establishing passage through such a country as a ground for inadmissibility of a claim for asylum in Hungary. The Serbian authorities in turn refused to readmit them into Serbian territory. The Hungarian authorities nevertheless continued to refuse to examine their asylum applications and sought to deport them back to their countries of origin. In the Röszke transit zone, the movement of asylum seekers was heavily restricted, with detainees being unable to move freely from one part of the zone to another and unable to leave the zone by virtue of the refusal of either the Hungarian or Serbian authorities to admit them into their respective territories. In an Opinion delivered in April, AG Pikamäe considered that the accommodation of the applicants in the Röszke transit zone constituted detention within the meaning of the Reception Directive and that such detention was unlawful, because the Hungarian authorities had not complied with the legal regime set out in the Directive.

The Court agreed with AG Pikamäe’s opinion that the accommodation of the asylum seekers in the Röszke transit zone amounted to detention within the meaning of the Reception Directive. It considered that ‘detention’ in this context could be defined as a coercive measure which presupposes the deprivation, and not a mere restriction, of the freedom of movement of the person concerned and isolates that person from the rest of the population, by requiring him or her to remain at all times within a limited and closed area. This criterion was met in this case, because the asylum seekers could not travel outside the zone into Hungary, were limited in their movement within the zone and could not enter Serbian territory without fear of penalties for doing so, since Serbia considered such entry to be unlawful.

Finally, the Court held that any such detention must be amenable to judicial review and thus, in the absence of national rules providing for such a review, the principle of the primacy of EU law and the right to effective judicial protection require the national court hearing the case to declare that it has jurisdiction to rule on the matter. The relevant court must further be empowered to order the release of the individual concerned or some other alternative to detention where it considers the detention to be contrary to EU law.

The Commission had adopted a Decision under the Merger Regulation in May 2016 blocking the proposed acquisition of Telefónica UK (which operated the mobile telephone network O2) by Hutchison 3G UK3 (which operated the Three network). The Commission considered that acquisition would have removed an important competitor on the UK mobile telephony market and that the merged entity would have only faced competition from two other operators, EE and Vodafone. It had concluded that the reduction from four to three competitors would probably have led to an increase in prices for mobile phone services in the UK and would have been likely to have a negative influence on the quality of services for consumers, hindering the development of mobile network infrastructure in the UK reducing the number of mobile network operators wishing to host other mobile operators on their networks.

The General Court annulled the Commission Decision. Firstly, it held that the effects of the operation on prices and on the quality of services for consumers had not been proved to the requisite legal standard. It held that the mere effect of reducing competitive pressure on the remaining competitors is not, in principle, sufficient in itself to demonstrate a significant impediment to effective competition in the context of a theory of harm based on non-coordinated effects.

The Court found the Commission erred in considering that an ‘important competitive force’ need not necessarily stand out from its competitors in terms of its impact on competition, since otherwise any undertaking in an oligopolistic market exerting competitive pressure could be treated as such. Furthermore, while the Court was satisfied with the Commission’s conclusion that and O2 were relatively close competitors in some of the segments of a market, it held that that factor alone was not sufficient to prove the elimination of the important competitive constraints which the parties to the concentration exerted upon each other and thus to establish a significant impediment to effective competition.

The Court also found that the Commission’s quantitative analysis of the effects of the concentration on prices was not capable of grounding the conclusion that prices would increase significantly as a result of the merger with a sufficiently high degree of probability.

Secondly, the Court held that the Commission had failed to show that the effects of the concentration on network-sharing agreements (of which there were two, with O2 and Three being party to one each, each with one other of the main competitors) and on the mobile network infrastructure in the UK would constitute a significant impediment to effective competition. The Commission had contended that the merged entity would, as a result of being party to both agreements, have been afforded an overview of the network plans of the two remaining competitors, Vodafone and EE, and the possibility of weakening them, thereby hindering the future development of the mobile network infrastructure in the UK.

The Court held that a possible misalignment of the interests of the partners in a network-sharing agreement, a disruption of the pre-existing network-sharing agreements, or even the termination of those agreements do not constitute, as such, a significant impediment to effective competition in the context of a theory of harm based on non-coordinated effects. The Court considered the Commission’s analysis in this regard to be inadequate because the effects of the concentration in relation to a possible exercise of market power, in the form of a degradation of the services offered by the merged entity or of the quality of its own network, were not analysed and should have been at the heart of any the assessment of the non-coordinated effects. It also considered that Commission failed to establish that in the event of the merged entity exercising its enhanced market power in these ways, the other party would have neither the ability nor the incentive to react following an increase in its costs and would simply cease to invest in the network.

In 2006, the vessel Al Salam Boccaccio ’98, sailing under the flag of the Republic of Panama, sank in the Red Sea, with over 1,000 fatalities. The families brought an action against the ‘Rina’ companies, who were responsible for the classification and certification of the ship. The families claimed that the Rina companies were responsible for the classification and certification processes that ultimately lead to the ship sinking and should therefore pay compensation under their civil liability. The Rina companies claimed that the court lacked jurisdiction, relying on the principle of immunity from jurisdiction, since the classification and certification operations were conducted upon delegation from the Republic of Panama and are, therefore, sovereign powers of the delegating state. The court referred a question regarding jurisdiction for preliminary ruling to the Court of Justice.

The Court of Justice had to consider two issues; 1. The interpretation of ‘civil and commercial matters’ within the meaning of Article 1(1) of Regulation No.44/2001 (the Brussels I Regulation), in order to ultimately establish whether the national court had jurisdiction under Article 2(1) of the same regulation; and, 2. The court also considered the possible effect, in terms of the application of the Brussels I Regulation, of the plea based on the principle of customary international law concerning immunity from jurisdiction.

The court held, first, that an action for damages, brought against private-law corporations engaged in the classification and certification of ships on behalf and upon delegation from a third state, falls within the concept of ‘civil and commercial matters’, within the meaning of Article 1(1) of the Brussels I Regulation. Therefore, within the scope of that regulation, provided that the classification and certification activity is not exercised under public powers within the meaning of EU law. Secondly, the court held that the principle of customary international law concerning immunity from jurisdiction does not preclude the national court from exercising the jurisdiction provided for by that regulation in a dispute relating to such an action, where that court finds that such corporations have not had recourse to public powers within the meaning of international law.

The court considered the following in relation to each of the above points; 1. Although actions between a public authority and a person governed by private law may come within the scope of the Brussels I Regulation where the legal proceedings relate to acts performed without exercising public powers (iure gestionis), the position is otherwise where the public authority is acting in the exercise of its public powers (iure imperii). The court stated that, in order to determine whether the operations at issue in the main proceedings were carried out in the exercise of public powers, the relevant criterion is the recourse to powers falling outside the scope of the ordinary legal rules applicable to relationships between private individuals. The Court of Justice concluded that, subject to the checks to be carried out by the referring court, the classification and certification operations carried out by the Rina companies cann9t be regarded as being carried out in the exercise of public powers within the meaning of EU law; and, 2. Per the Court’s previous decisions, the immunity of Member States from jurisdiction is not absolute, but is generally recognized where the dispute concerns sovereign acts performed iure imperii. The principle may be excluded, therefore, if the legal proceedings relate to acts which do not fall within the exercise of public powers. The Brussels I Regulation was not precluded from applying in this situation.