Ukraine: Is a chemical or biological attack likely?

Exploring key questions about chemical and biological weapons as, although large-scale use in Ukraine appears unlikely, concerns remain about targeted attacks. 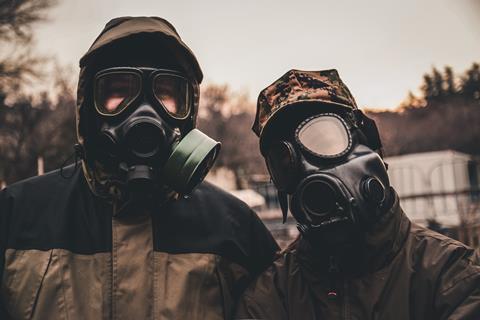 Despite their almost universal prohibition, chemical weapons have been used in conflict in recent years but, as the illegal industrial production of chemical weapons would be difficult to keep hidden and the use of chemical weapons in Ukraine would aggravate international responses to Russia’s aggression, it seems unlikely they would be used on a large scale in the conflict.

However, the possibility remains of limited or targeted use of a chemical weapon such as a novichok nerve agent — as part of an assassination attempt, or to spread fear and panic, and perhaps falsely claim that Ukraine was the perpetrator. Certainly the use of disinformation around chemical and biological weapons appears to be part of a wider information strategy to discredit Ukraine and justify the Russian invasion by alleging a perceived existential threat, particularly for a domestic Russian audience.

This threat could then be realised by a limited use of chemical weapons which is blamed on Ukrainian forces, although the threat alone may be enough to fulfil the Kremlin’s aims.

What are chemical and biological weapons?

A chemical weapon is any toxic chemical which can cause death or harm to humans or animals via its chemical properties. The intended use of the chemical is key to its designation as a chemical weapon. Biological weapons are microorganisms such as viruses, bacteria, or fungi, or bio-toxins produced and released deliberately to cause disease and death in humans, animals or plants – examples include anthrax, botulinum toxin, and plague.

The Organisation for the Prohibition of Chemical Weapons (OPCW) implements the provision of the convention, which has an extensive verification regime and has supervised the destruction of almost all the chemical weapons stocks ever produced.

Also included in the constraints are precursor chemicals used to produce a toxic chemical, and any munitions or devices designed to inflict harm or death by releasing toxic chemicals such as mortars, artillery shells, missiles, bombs, mines or spray tanks.

Four types of chemical agents are used in chemical weapons:

183 states are party to the BWC including both Russia and Ukraine and the Biological Weapons Convention Implementation Support Unit provides administrative support and assists with the implementation and universalisation of the convention. Unlike the CWC, there is no verification or investigation mechanism for the BWC but it has a confidence-building mechanism encouraging states to make declarations on their activities under the obligations of the convention.

When has Russia used chemical or biological weapons?

In October 2002, an unconfirmed opioid mix was used by the Russian government as part of a domestic operation to storm the Dubrovka Theatre in Moscow where Chechen terrorists had taken almost 900 civilians hostage. Yuri Shevchenko, the Russian health minister at the time, claimed the substance pumped into the theatre was a derivative of the opioid fentanyl, but provided no further information.

Subsequent analysis of British victims suggested that carfentanil and remifentanil were present. Although this was intended to be non-lethal, and it is not explicitly prohibited by the CWC, hundreds of civilians were injured or killed by the use of the substance and the lack of information provided to medical professionals.

During the war in Syria, the OPCW-UN Joint Investigative Mechanism (JIM) concluded that the Syrian military had repeatedly used chlorine gas as a weapon in 2014 and 2015, as well as the sarin nerve agent in attacks on Khan Shaykhun in 2017, with a total of 17 cases of use or likely use of chemical weapons in Syria.

Russia refused to accept these findings and made efforts to undermine OPCW and block international action against its ally Syria, including forcing an end to the JIM that produced the evidence against Syria, by using its UN Security Council (UNSC) veto against three renewal resolutions in 2017.

On 27 September 2017, OPCW verified the total elimination of Russia’s declared chemical weapons stocks. Yet on 4 March 2018 a novichok nerve agent was used in Salisbury in the UK in an attempted assassination of Sergei Skripal by officers from the Russian military intelligence service (GRU), resulting in the death of British national Dawn Sturgess and injury to others. On 20 August 2020, Russian politician Alexei Navalny was also poisoned with what the OPCW identified as a novichok nerve agent.

Novichok means ‘newcomer’ in Russian and refers to a specific type of advanced nerve agent developed by the Soviet Union and directly linked to Russia. Although it has been shown novichok nerve agents were illegally used and therefore produced or retained in small quantities, the OPCW does not know what level of stocks of illegal chemical weapons Russia may or may not have – however, it would be difficult to produce secret chemical weapons on an industrial scale without detection.

Would Russia use chemical or biological weapons in Ukraine?

Russia’s actions have continually threatened and undermined the international norm against the use of chemical weapons and show Moscow has little respect for upholding its responsibilities under the CWC. But Russia denies the allegations and frequently spreads disinformation, such as suggesting the use of chemical weapons in Syria was either staged by Western intelligence or perpetrated by opposition forces, along with similar denials or accusations in relation to the targeted assassination attempts.

This pattern is now being repeated, with unsubstantiated claims from Russian officials insinuating Ukrainian forces have taken actions contrary to their obligations under the CWC. Although this information has been publicly condemned as false by 49 member states of the OPCW, these disinformation efforts could be an attempt to lay the ground for the Russian use of chemical weapons in Ukraine as a ‘false flag’, with the blame directed at Ukrainian forces.

US press secretary Jen Psaki stated everyone should be ‘on the lookout’ for Russia to possibly use chemical or biological weapons in Ukraine, and intelligence sources claim it is a ‘serious concern’. NATO has pledged to provide specialist assistance and protection against threats of a chemical, biological, radiological, and nuclear nature to Ukraine, as well as enhancing its own preparedness and readiness for these threats.

There are also heightened concerns over the use of chemical or biological weapons in targeted attacks against Ukrainian peace negotiators. Reportedly two members of the Ukrainian delegation to peace talks with Russia on 3 March 2022 along with Russian oligarch Roman Abramovich experienced symptoms consistent with poisoning immediately after the meeting – all have since recovered.

How is disinformation used around chemical and biological weapons?

Similar disinformation campaigns have been revived in recent years, with repeated accusations of biological weapons development aimed at the US and false information spread related to COVID-19 vaccines, public health and research laboratories, and promoting a conspiracy theory that the virus was a biological weapon.

”This current Russian disinformation campaign is not only an attempt to undermine international norms against the use of chemical and biological weapons, but is another way for Vladimir Putin to falsely shape the narrative”

On 11 March 2022 the Russian Mission to the United Nations asked for a meeting of the UN Security Council to discuss unfounded allegations of military biological activities in Ukraine in relation to public health laboratories, and the Russian foreign minister Sergei Lavrov recently accused the US of developing biological weapons in Ukraine. In response Izumi Nakamitsu, UN High Representative for Disarmament Affairs, stated the UN is ‘not aware of any biological weapons programmes’.

The US and other countries do fund public health laboratories which undertake research and diagnostic functions to counter the threat of infectious disease outbreaks, but these peaceful purposes are distinct from biological weapons production. These laboratories are openly documented and facilities are inspected by the World Health Organization (WHO).

Similar activities are undertaken in laboratories and research institutes across the world – including Russia – as part of the global effort to detect, prevent, and prepare for public health emergencies.

The US initiated the Biological Threat Reduction Program in 1997, as part of the broader Cooperative Threat Reduction Program also known as the Nunn-Lugar Act, to eliminate and demilitarize the biological weapons infrastructure inherited by Russia, which included working with Russia in Russian laboratories, and has worked as part of the G7-led Global Partnership against the Spread of Weapons and Materials of Mass Destruction to help address and reduce biological threats since its inception in 2002.

As well as the focus on laboratories, the program also works to re-deploy scientific expertise into public health and disease surveillance work to protect global health security, and has expanded its work beyond the former Soviet Union countries as part of the Cooperative Biological Engagement Program.

Why is disinformation being used around chemical and biological weapons in Ukraine?

This current Russian disinformation campaign is not only an attempt to undermine international norms against the use of chemical and biological weapons, but is another way for Vladimir Putin to falsely shape the narrative of Russian actions in Ukraine as defensive and a reaction to an existential threat.

This flood of information may be setting the ground for the targeted use of a chemical weapon as a ‘false flag’. Repeated reference to weapons of mass destruction (WMD) also helps reinforce the Russian narrative that international intelligence agencies – specifically the US and UK – cannot be trusted because of their failures in assessing WMD in Iraq in 2003 and aims to undermine their assessments of the war in Ukraine.

To uphold its obligations to the BWC, Russia should not have any stockpiles of biological weapons to use. Such weapons would have catastrophic and indiscriminate consequences on the civilian population, and also risk infections in neighbouring countries, as well as the risk of injury and death to Russia’s own forces. It seems highly unlikely that Russia would risk using these weapons, but does use the threat of them for shaping a defensive narrative.

There is no conceivable reason for Ukrainian forces to use chemical or biological weapons in their own occupied territory, and there is no evidence to suggest that Ukraine is not fulfilling its obligations under both the CWC and the BWC.

What would be the response to a chemical or biological weapons attack?

This article was originally published on 30 March 2022 by Chatham House here. It has not been changed by us and we re-publish it with the author’s consent for which we are grateful.”