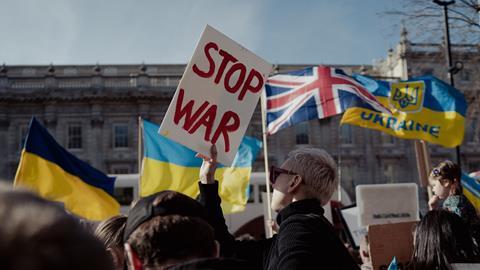 Putin and Russia must answer for war crimes in Ukraine

Human life has little to no value to Russian President Vladimir Putin and his cronies. The widespread war crimes and crimes against humanity that continue to be perpetrated by Russian forces in Ukraine are a testament to this. Those responsible, including Putin himself, must be held to account, no matter how long it takes.

Since Russia’s launched its brutal war in Ukraine on 24 February, rather than taking steps to avoid civilian casualties, the Kremlin has maximised attacks against the civilian population. Unspeakable, deliberate cruelty and violence have been unleashed on Ukrainian civilians. The use of banned weapons such as cluster munitions and anti-personnel landmines has become the norm.

According to the UN, more than 3,573 civilians, including children and the elderly, have been killed since 24 February, and over 3,816 were injured. The actual figure is almost certainly far higher.

Russia denies all accusations of war crimes and the targeting of civilians. Yet, there is ample evidence to prove this. In the wake of the withdrawal of Russian troops from districts north of Kyiv, wide-scale atrocities were unearthed. In the town of Bucha, Ukrainian citizens were found dead with their bodies lying in the streets, many with their hands tied behind their back. Russian forces rounded up men and summarily executed them. US Secretary of State Antony Blinken described the atrocities in Bucha as “a deliberate campaign to kill, to torture, and rape.” It is the same story in numerous other Ukrainian towns and villages, including Irpin, Staryi Bykiv and Vorzel.

In under 3 months, the Black Sea port of Mariupol, one of Ukraine’s fastest developing cities, was reduced rubble. In March, Russia bombed a cinema in the town despite the fact that hundreds of families with young children were using it as a bomb shelter. And this was only the beginning. Today, Mariupol resembles the destroyed Syrian city of Aleppo, which Russia flattened in 2016 during a month-long aerial bombing campaign. Russia was subsequently, accused of carrying out war crimes by the UN. Mariupol is the new Aleppo.

One can only imagine the horrors that will be exposed in Mariupol when Ukraine liberates the city from the Russian occupiers. The UN Human Rights Commissioner estimates that thousands of civilian casualties will be uncovered.

In addition to brutal killings, Russian troops have been accused of raping women and children. Rape and sexual assault are considered war crimes and a breach of international humanitarian law. Large-scale kidnapping is also happening, with many Ukrainians sent to detention camps where they have been interrogated and tortured.

The Russian army also targets civilian infrastructure, including schools, kinder gardens, shopping centres and hospitals. The World Health Organisation (WHO) estimates that at least 43 hospitals have been bombed. Russian troops have purposely blocked humanitarian aid to Ukrainians. They have also been accused of looting, including food, clothing, and firewood.

Shockingly, those that have committed these crimes have been rewarded by Putin. The honorary title of Guard was awarded to the Russian 64th Motorized Rifle Brigade, which is accused of carrying out war crimes in Bucha.

Today, only a fraction of the atrocities committed by Russian troops have been documented. The true scale of the Kremlin’s brutality is yet to be seen.

As more and more horrendous evidence emerges from Ukraine, it is clear that the work of gathering evidence and investigating is vital. Preserving evidence critical for war crimes prosecutions must be a priority if those that have committed these heinous crimes are to be prosecuted and jailed. Furthermore, international cooperation will be crucial to fully investigate cases of war crimes and bring those responsible to justice. Local and international actors, including civil society, have a key role to play.

In Ukraine the ball is already rolling. The Ukrainian authorities opened an investigation into what happened in Bucha. The country’s first war crime trial took place on 13 May. 21-year-old Vadim Shyshimarin is accused of killing an unarmed 62-year-old civilian on 28 February. Many other such cases will follow.

At the international level, the Prosecutor at the International Criminal Court (ICC) opened an investigation into alleged war crimes, while the United Nations Human Rights Council (UNHRC) has also opened a Commission of Inquiry into violations of the laws of war in Ukraine. These are important steps. Yet, clearly this is not going to be a quick or easy process. It may take many years. There needs to be strong determination to stand shoulder to shoulder with Ukraine on this for the long term.

Russia’s act of bloody aggression, which increasingly looks like a genocide against the Ukrainian people, must not go unpunished. It is essential that those responsible, including Putin, are brought to justice for their war crimes and crimes against humanity.