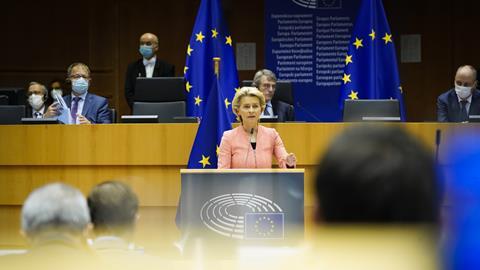 Although the President shared only some ideas for the immediate future, the speech was filled with announcements of new initiatives and commitments. Von der Leyen clearly put the European Union on a very ambitious path, aiming to become a future world leader in a number of areas without losing sight of ensuring solidarity across the EU and making sure no one is left behind.

Unsurprisingly, the global pandemic of Covid-19 and its impact have featured prominently in von der Leyen’s speech. She pointed out that the pandemic has left the EU fragile but from this fragility Europe needs to move towards a new vitality.

Promising more protection for European citizens, von der Leyen announced more funding for medical research, especially through setting up of a new European Agency for Biomedical Advanced Resource and Development (BARDA). She also called for strengthening the powers of the European Centre for Disease Control (ECDC) and for coordinated efforts for strategic stockpiling to address deficiencies in supply of pharmaceuticals and medical goods. Finally, she announced the convening of the Global Health Summit next year and launching a debate on the EU competencies in the area of health to better address cross-border threats or emergencies.

Von der Leyen stressed that as the virus still lingers around, ‘this is not the time to withdraw our support from the economy.’ There was much referencing in this regard to the unprecedented coronavirus support package agreed by the EU over the summer. Many of the programmes announced will draw on those funds, with an acknowledgement that there is now a reinforced need for the EU monetary union to be strengthened. Recognising the role of the SMEs as the motor for recovery, the Commission recalled its SURE programme, which has been set up to fight the negative economic and social consequences of the coronavirus outbreak. This programme has provided funding to 16 EU countries to the tune of almost 90 billion euros for supporting those Member States’ workers and companies most affected by the Covid-19 crisis.

Crucially, the Commission announced a proposal for a legal instrument for a minimum wage, subject to Member States’ competences. She stressed it that everyone must have access to a minimum wage, either through collective agreements or through statutory provisions, adding that ‘in our Union the dignity of work must be sacred.’

More than 3 trillion Euro were authorised in support of companies and industry during an ‘unprecedented crisis with an unprecedented response.’

The President of the Commission urged that ‘now is the time to hold our course’, that support will not be withdrawn, and that we can expect to see Member States economies move again after a 12% drop in the second quarter of 2020.

As expected, and building on the Green Deal, the Commission intends to push to ensure that Europe remains a world leader in climate change. This is envisaged through an approach which can be described as both ‘carrot and stick’. On one hand there will be support for European businesses to transition towards digital and environmentally sustainable adoption, while on the other hand the Commission will proceed with tax measures on carbon dioxide intensive activities. The overall goal is to become the first climate neutral continent by 2050, with a 55% reduction in carbon monoxide emissions by 2030.

Acknowledging that digital acceleration is only just starting, von der Leyen stated that EU’s action in the digital policy must focus on three areas: data security, technology and infrastructure.

On business-to-consumer data, she pointed out that Europe was too slow and it was following others. She recalled that the quantity of industrial data will grow 4 times in the next 4 years and that economy based on such data would be an engine for innovation. To this end, she continued, Europe must ensure the availability of this data, especially in such sectors as healthcare, as well as for universities and businesses. This will be achieved through creating a European cloud on the basis of GAIA-X system.

On artificial intelligence (AI), the President underlined tremendous opportunities offered by this technology but also recalled that it needs proper regulation. To this end, the Commission will present a proposal for a legislative act on AI next year. The Commission will also come with a proposal of a secure European digital identity to allow better control of citizens’ personal data.

On infrastructure, von der Leyen stressed that broadband connectivity is a pre-condition to bringing more opportunities to every corner of the EU, especially for revitalisation of the rural areas where 40% of them have no broadband access.

Stressing the need for Europe to become digitally sovereign, the President announced an €8bn investment in supercomputer technology. ‘This will be high tech, made in Europe’ she underlined.

Europe in the world

Following the latest meeting of EU-China leaders on Monday, von der Leyen acknowledged the EU’s complex relationship with China by stating that China was ‘a negotiating partner, an economic competitor and a systemic rival’. On their common interest in climate change, she challenged China to lead by example and abide by its commitments in the Paris Agreement. Von der Leyen provided a glimpse into the key issues which are as yet unresolved such as market access for European companies, reciprocity and overcapacity.

Commission President stated that Europe will always support the transatlantic alliance and intends to rebuild its agreement with the US. It will be ‘new beginnings with old friends.’

The Commission President appealed to Members States, who complain that the EU is too slow to denounce human rights abuses, to be ‘courageous’ by moving to qualified majority voting. Qualified majority voting is a mechanism employed by the Council of the EU and European Council which allows decisions to be made without unanimity but that exceeds a simple majority.

Von der Leyen announced that she will be putting forward a proposal for a European version of the Magnitsky Act, similar to the US legislation, to target individuals involved in human rights abuses globally who could face EU asset freezes as well as travel bans.

Von der Leyen empathetically stated the EU’s support for the people of Belarus and declared the recent election on 9 August as neither fair nor free. Officially, Mr Lukashenko won by a landslide, however according to the opposition he rigged the election. She condemned the Belarussian government’s brutal response to mass anti-government protests as ‘shameful’.

The Commission President warned against closer ties with Russia by citing incidents in Georgia, Ukraine, Syria, Salisbury as well as the poisoning of Alexei Navalny, a vocal critic of Putin, as evidence of a pattern which is not changing. Russian opposition figure, Navalny, collapsed on a flight from Siberia on 20 August with tests since showing that he was poisoned with a Novichok nerve agent. In 2018, Britain accused Russia of carrying out an attack involving Novichok in Salisbury, England. Russia has denied involvement in the incidents.

According to von der Leyen, despite the geographic proximity of the EU and Turkey, the distance between them is furthering, certainly in view of Turkey’s ‘attempts to intimidate’ Cyprus and Greece. She affirmed that these Member States could count on the EU’s full support after a row over energy claims in the Eastern Mediterranean. The Commission President stressed that de-escalation in the region was in their mutual interest and referred to the return of Turkish exploratory vessels to their ports as a positive step towards this.

Von der Leyen recalled the EU-UK negotiations and expressed concern that the chances for an agreement are lower especially given the tight timetable. She stressed that the Withdrawal Agreement, which was agreed and ratified in November last year, cannot be changed and its provisions need to be respected. Quoting the late UK Prime Minister Margaret Thatcher, von der Leyen said: ‘Britain does not break treaties. It would be bad for Britain, bad for relations with the rest of world, and bad for any future agreement on trade.’ Trust, she stressed, is the ‘foundation of any strong partnership.’

Migration is an issue that has been discussed long enough: it has always been a fact for Europe and it will always be.

Von der Leyen acknowledged that the 2015 migration crisis has left divisions between Member States which are still with us today, and we need to do more. She stressed that Europe must be ready to find a compromise, but without compromising its principles: this is the way to a solution. To this end, she announced the publication of a New Pact for Migration in the week of 21 September. The Pact will take a human and humane approach since ‘saving lives at sea is not optional.’ Countries which are more exposed to large migration flows must be able to rely on the solidarity of the whole of the European Union.

Commission President pointed out that there will be actions against smugglers, to strengthen the external borders, deepening of external partnerships and creation of legal pathways to migration. The distinction between asylum and cases where individuals will have to returned to their home nation will be clear, but people who have the right to stay must feel welcome: they have skills, energy and talent, they have a future to build.

Von der Leyen said that everybody has to step up and take responsibility and Europe must manage the question of migration together: migration is a European challenge and all of Europe must do its part.

Von der Leyen stated that trust is at the heart of our Union, and it is anchored in our founding values, our democracies and community of law. The rule of law, she recalled, that protects people from the rule of the powerful, is the guarantor of our rights and freedoms.

At the end of this month the Commission will adopt its first annual report on rule of law for each Member State: this is a preventive tool for early detection of challenges and for finding solutions.

This should be the starting point for the Parliament, Commission and Member States to ensure that there is no backsliding. Von der Leyen stressed that we have a duty to be vigilant, to care and nurture the rule of law. She committed to protecting the integrity of EU institutions, the primacy of European law, the freedom of the press, and the independence of the judiciary. European values are not for sale.

The Commission President concluded her state of the Union address by affirming the Union’s commitment to an open society of values and diversity. Quoting the late John Hume, the President of the Commission highlighted that, ‘peace is the respect for difference’; that ‘difference is natural, and it is the essence of humanity’. She stated that exclusion will be tackled and racism will not be tolerated. The Union is to go from condemnation to action. Legislation in the area of racial equality and non-discrimination is to be strengthened with the promise that the Commission will get tougher on enforcement when implementation lags behind. To this effect, a new role of Anti-Racism Coordinator will be created within the Commission.

Referring directly to the situation in Poland, von der Leyen stressed that LGBTQI free zones have no place in EU. Referring to the Black Lives Matter movement, she also acknowledged the systemic racism on the European continent.