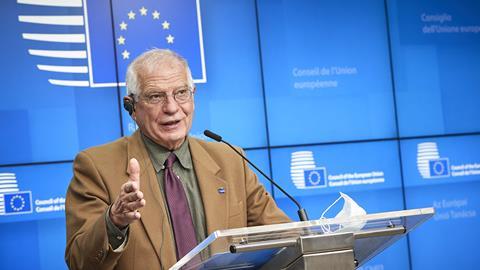 On 7 December 2020, the Council of the European Union adopted a framework consisting of a decision (Council Decision CFSP 2020/1999) and a regulation (Council Regulation EU 2020/1998) which establish a global human rights sanctions regime. This framework means that the EU can now target individuals, entities and bodies, as well as state and non-state actors, who are responsible for, associated with or involved in ‘serious human rights violations and abuses worldwide’, regardless of where they occurred.

The decision highlights the importance the EU places on promoting and protecting human rights globally.

In 2012, the US adopted the Magnitsky Act which imposed sanctions on individuals associated with human rights violations and corruption. The US expanded this in 2016 with the adoption of the Global Magnitsky Act.

The EU traditionally imposed sanctions against third countries for human rights abuses as a part of its country-based sanctioning regime (for example against Belarus, Iran or Venezuela). Prior to the adoption of the new framework, outside of this country-based regime, the EU had no specific mechanism to impose sanctions on individuals or entities accused of human rights abuses.

In December 2019, the Council welcomed the launch of preparatory work to establish an EU Magnitsky-style regime to impose restrictions where serious abuses of human rights have occurred.

In November 2020, the Council approved conclusions on an EU Action Plan on Human Rights and Democracy 2020-2024. The action plan set out the EU’s priorities as well as its ambition in this area relating to its ties with all third countries. The plan also contained a commitment to developing a new horizontal EU global human rights sanctions regime.

The UK adopted its own, autonomous Magnitsky-like sanctions regime, the Global Human Rights Sanctions Regulations 2020, which put in place measures to deter and provide accountability for activities by individuals or organisations globally which would amount to a serious violation of an individual’s human rights. In July 2020, the UK targeted 49 people and organisations (located in Russia, Saudi Arabia, Myanmar and North Korea) using its new sanctions regime.

The EU will now be able to impose new restrictive measures such as travel bans for individuals. Additionally, the EU will be able to freeze funds for both entities and individuals. Furthermore, making funds available to those listed (either directly or indirectly) will be forbidden for people and entities in the EU.

These measures apply to serious human rights violations such as: arbitrary arrests or detentions, crimes against humanity, extrajudicial killings, genocide, slavery, torture. Human rights abuses which are systematic, widespread or otherwise of serious concern (regarding the objectives of Article 21 of the Treaty of the European Union – common foreign and security policy) can also fall under the scope of the sanctions regime.

The Council, acting upon a proposal from either a Member State or the High Representative of the EU for Foreign Affairs and Security Policy (currently Josep Borrell), will establish, amend and review the sanctions list.

The new framework does not dispense with the unanimity requirement for designations to be adopted in the Council. However, the new approach of sanctioning individuals and entities does reduce geopolitical tension compared to the country-based sanctioning of potential economic allies or trade partners.

To date, the EU has not designated any individuals or entities under this new framework. The extent to which the EU will proactively make use of these new sanctions remains to be seen.