In this special feature, the new President of the Council of Bars and Law Societies (CCBE) describes her priorities of her Presidency which include the rule of law, the EU initiatives relating to the fight against money laundering and their impact on citizens’ rights, the challenges brought by the digitalisation of justice and the support to persecuted lawyers worldwide.

1. What is your professional background prior to the CCBE Presidency?

I have been a lawyer since 1983 and a specialist lawyer for criminal law since 1998. From 1999 to 2011, I was on the board of the Berlin Bar Association and I became its President from 2004 to 2009. Alongside my activities as a criminal defence lawyer, I advise on compliance issues and act as External Ombudsperson for several companies. In addition to my work as a lawyer, I am also a judge at the Constitutional Court of Berlin since 2014. After many years of engagement for criminal law issues in the German Bar Association and for European law issues in the German Federal Bar I joined the CCBE as a member of its Criminal Law Committee in 2008. From 2015 until 2017 I became a member of the CCBE German delegation to the CCBE and was elected Vice-President of the CCBE at the end of 2017. Since 2018 I then have been actively involved in the Presidency work and at the 27 November CCBE Plenary Session, I was elected President of the CCBE for 2021. 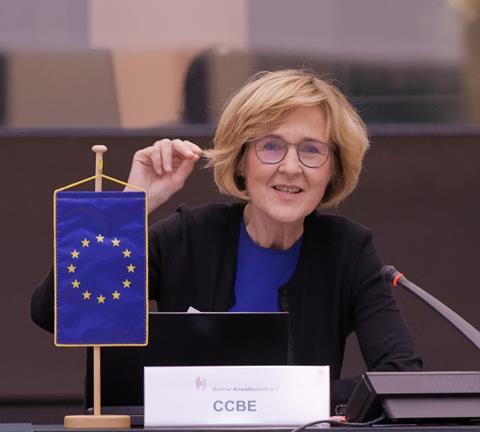 2. Are there interests outside of your work as a lawyer and how to you find a balance for your personal life?

There are various factors: My four children, none of whom chose to become a lawyer, certainly provide some of the necessary balance. I enjoy the exchange on completely different topics than I am involved with as a lawyer. Besides this, I am happy that my husband’s job gives me a lot of connection to theatre and music in my free time. Singing and playing the piano help to relax and concentrate on very different challenges. Finally, after all, I don’t want to miss running in the morning in the beautiful landscape with lakes and parks in the area of Potsdam, where I am living near to Berlin.

3. What will be your main priorities during your mandate as President?

My priorities will be particularly the issue of the rule of law, the EU initiatives relating to the fight against money laundering and their impact on citizens’ rights, the challenges brought by the digitalisation of justice and the support to persecuted lawyers worldwide. I will continue to keep the CCBE visible on EU Level and beyond in the area of the Council of Europe and to ensure that the voice of the European lawyers is heard and recognised.

Among all the current challenges of the legal profession, particular attention will be given to the issue of the rule of law under my presidency. Because of their essential role in the administration of justice and the protection of fundamental rights, lawyers are one of the pillars of the rule of law and must be recognised as such in their daily practice as well as when new law is drafted like e.g. anti-moneylaundering provisions.

The fight against money laundering is an important European concern. The Commission has identified a need for a European supervisory authority. A regulation is also under discussion. The CCBE will fight to ensure that the legal profession is not placed under a European supervisory authority in connection with the fight against money laundering. At the moment, it looks like this model might be limited to the supervision of financial institutions for the time being, but this will certainly only be the beginning. Since the second anti money laundering directive up to the fifth anti money laundering directive the obligations for lawyers have become increasingly strict.

Of course, we do not want to protect lawyers when they are involved in money laundering and we do not deny that in exceptional cases this might happen. However, the right to confidentiality for citizens who seek advice from lawyers is an essential element of the rule of law. The legal profession, being part of the administration of Justice, forms a pillar of the rule of law and must not be made the extended arm of the state. This would not comply with the requirement of the independence of every single lawyer. It is therefore the task of the CCBE to repeatedly draw attention to the importance of this basic principle of legal professional privilege/professional secrecy in order to maintain the rule of law.

At this point we sometimes are also fighting “uphill” as individual cases can sometimes cast a negative image on the wider legal profession. The CCBE’s task is to ensure that the public and lawmakers are aware that it is essential to maintain the independence of the legal profession and that there is no alternative to self-regulation. Moreover, the CCBE will remain vigilant that the digitalisation of justice efforts remain focused on improving the quality of justice systems and are not only introduced for achieving efficiency gains or cost savings. Increasing access to justice by simplifying judicial proceedings and reducing costs may sound like a desirable outcome, however, there is little value in increasing access to justice if the quality of justice is undermined in doing so.

With the great benefits offered by technology also comes a great responsibility to ensure that the use of technologies in justice remains ethical, fair and human centred. The CCBE will continue to act for the defence of the defenders i.e., to support lawyers under threat around the world. Between 2010 and 2020, approximately 2,500 lawyers world-wide have been murdered, arrested or threatened in the exercise of their legitimate activities as lawyers (sources: http://idhae.fr/publications/). In 2020 the CCBE Human Rights Award was granted to seven lawyers from Egypt. All award winners have been in pre-trial detention for a significant period of time - without specific allegations and only because they represented something that was not in line with the opinion of the state authorities. Another exceptional Award was granted posthumously to Turkish lawyer Ebru Timtik who died after a hunger strike in August 2020. She lost her fight for a fair trial in such a tragic way and will nevertheless continue to accompany us as a symbol for the commitment to the rule of law. The CCBE will continue to support persecuted colleagues outside the EU.

But we also resist when colleagues in some EU countries such as Poland, Hungary or Bulgaria are denounced with negative narratives in public or - as happened in Warsaw - are arrested on the steps of the court. There is still a long way to go to ensure that all lawyers are able to practise their profession without fear of persecution. In this context, one of the main priorities of the CCBE will be to promote the adoption of a European Convention on the profession of lawyers considering that such a specific binding instrument is needed in order to preserve the independence and the integrity of the administration of justice and the rule of law.

4. Which additional developments of interest for the legal profession do you expect in 2021 at EU level?

In response to various policy developments, control and assurance of quality of legal work is something the CCBE will be also focusing on during the year 2021. The CCBE has established a working group to develop a position on this matter. Of course, we are all in favour of enhancing quality and its assurance. Monitoring this for a profession whose practice is based on confidentiality with regard to clients and the content of the advice is a challenge. There are examples in Europe and worldwide where the quality of the legal advice and representation is checked by peer reviews. We will have to decide whether this might be a solution. I, personally, am rather sceptical about this concept, and would rather favor to work on ideas regarding training obligations and specialisation requirements which we see in some countries. This issue will remain a challenge for us. Moreover, the European Public Prosecutor’s Office in Luxembourg will start its work in 2021. The CCBE will of course follow this closely and we would like to hold talks right from the start. The CCBE will have to ensure that imbalances which would impact the rights of the accused do not occur with regard to the “mix” of criminal proceedings in the Member States and decisions which are made in Luxembourg. Finally, the COVID-19 pandemic will keep us occupied in 2021 as well. Although we all hope that we will be able to return to normal at some point of time in the year the challenges currently remain and I am sure that we will have to deal with the changes and shortcomings in the justice system even for some time after the pandemic hopefully will have come to an end.