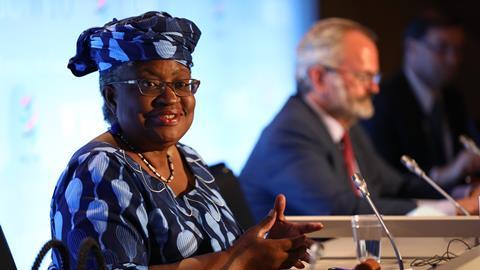 The EU at the WTO: the next Director-General

In May this year, the Director-General of the World Trade Organisation, Roberto Azevedo, announced his surprise resignation effective on 31 August 2020, a year ahead of schedule. The intergovernmental organisation is currently being run by a coalition of four Deputy Director-Generals serving in an interim capacity.

The WTO has been experiencing difficulties recently, including the blocking of member appointments (effectively judges) to the Appellate Body by the United States. This has, in effect, paralysed the Appellate Body as there are insufficient members to hear new appeals. The Appellate Body is the final adjudicator of WTO dispute settlement system.

The organisation has also had to contend with the US-China trade conflict as well as the fallout from the COVID-19 pandemic.

Both remaining candidates are women, meaning whichever of them is appointed, would be the first female Director-General. Ms Okonjo-Iweala, who would also be the first African appointed to the role, spent much of her career as an economist at the World Bank rather than immersed in the details of trade policy, however, she often dealt with international trade. Ms Yoo is more of a trade specialist, with a career in trade spanning 25 years, including involvement in South Korea’s trade negotiations with China and the US.

On 28 October, a WTO Nominations Committee recommended that all WTO member countries should support Ms Okonjo-Iweala’s appointment. However, the US unilaterally stated that it would continue to support Ms Yoo’s candidacy causing a stumbling block for the selection process. Ms Okonjo-Iweala is reportedly backed by the European Union, China, Japan, Australia, African nations and countries in the Caribbean. It is possible that the US position may be changed by an expected Biden administration.

The EU is currently exploring reform of the WTO and published a concept paper on ‘WTO modernisation’. The paper focuses on three key areas: updating the rule book on international trade to capture today’s global economy, strengthening the monitoring role of the WTO and overcoming deadlock on the WTO dispute settlement system.

Although the EU has not formally endorsed either of the candidates, Sven Simon and Bernd Lange, co-chairs of the European Parliament’s Steering Group on the Parliamentary Conference on the WTO (PCWTO), stated that the Parliament is backing Ms Okonjo-Iweala. Furthermore, on 26 October, an EU official reportedly told the Politico that backing her was “a clear signal towards Africa and a sign of mutual trust” and “a strong signal to reinforce the multilateral order”.

Ms Okonjo-Iweala said in October, “I am a reform candidate and I think the WTO needs the reform credentials and skills”. She told the PCWTO that if she was appointed her first steps would be to tackle special and different treatment, industrial subsidies, dispute settlement reform. Ms Okonjo-Iweala also called to open up the WTO to more cooperation with other international institutions and parliaments. Further, she recognised the need for positive momentum by concluding agreements on e-commerce, fisheries and health. Ms Okonjo-Iweala’s focus on delivering sustainable development goals and value-based trade align with the EU’s global priorities and the reform sought in their concept paper.

On Ms Yoo’s website, she states that if appointed Director-General she would address both questions regarding the WTO’s modern relevance and its trust deficit. She wrote, ‘First and foremost, the WTO needs to keep evolving to become more relevant to the changing economic realities in the 21st century’. She further stated that the, ‘negotiating function must be revitalized so as to bring much-needed updates to the rulebook. Another priority would be to restore the effective functioning of the dispute settlement mechanism.’

Whoever is appointed would need to unite the WTO’s membership and bring key players together to find compromises to solve the current challenges facing the WTO as well as the discord between members.

Traditionally, the WTO chooses its Director-General by consensus, with approval from all 164 members required.On 9 November, Ms Okonjo-Iweala’s appointment as the new Director-General was expected to be put to a meeting of the organisation’s General Council after the recommendation from the WTO Nominations Committee. Keith Rockwell, a WTO spokesman, said that it was likely “frenzied activity” would occur until then to secure a consensus. However, this meeting was postponed until further notice ‘for reasons including the health situation and current events’ (according to a WTO document seen by Reuters). Reuters also noted from trade sources that one factor for the delay was the lack of indication from the Trump administration, which will continue to govern trade policy until Inauguration Day, that it would switch its support to Ms Okonjo-Iweala.

Ms Yoo, the candidate backed by the US, has not withdrawn from the race, despite reportedly mounting diplomatic pressure.

EU and the WTO