Brexit: where to next for the UK & EU?

This month in Brexit saw MPs reject the text of the Withdrawal Agreement for a second time, while PM May travelled to Brussels to ask EU27 leaders to grant the UK an extension of the Article 50 negotiating period.

In return, leaders provided for a short, unconditional extension until 12th April, to allow the UK to decide on its broader approach to leaving the EU. It also provided a basis for another short, technical extension until May 22nd, provided the Withdrawal Agreement is passed by MPs and that the extra time allocated is used to ensure that the UK is ready to move to the transition period.

The European Council also indicated that all options remain open to the UK: concluding the Withdrawal Agreement with a short extension; a no deal exit on 12th April; revocation of Article 50 and remaining in the EU (which would presumably require a longer extension where the UK participates in the EU elections).

Below you will find four different scenarios which explore what possibilities lie ahead.

Scenario No 1: No deal

In this first scenario, there are two possibilities: (a) the Withdrawal Agreement is not put to the vote or (b) it does not pass.

In the first instance, the Government fails to put the Withdrawal Agreement to vote before the 12th April. This could happen if it fails to satisfy the Speaker of the House that the text has changed sufficiently for MPs to reconsider. This might also happen if the Prime Minister decides that she does not have enough MPs on board to pass the text, and therefore steers away from a vote in order to avoid defeat for a third time.

In the second instance, it is possible that the Withdrawal Agreement is put to a vote but that it fails.

If either of these instances occur, and no other action is taken by the Government or MPs, then the UK will leave the EU on April 12th without having any arrangements in place with the EU.

Although MPs have already voted against a no deal Brexit, unless an active decision on what should follow next is taken to change the UK’s current course, then the UK will depart the EU without a deal.

In this scenario, it must be noted that the EU will be limited in what it can offer the UK, as the negotiations will be founded on a different legal base under the EU’s treaties. This means that the UK will only be able to negotiate a limited Free Trade Agreement with the EU in the immediate term following a no deal Brexit. Please see our earlier article on the issue here.

However, it must be stressed that a no deal scenario is not likely to be an end in itself. Instead, it is likely that the negotiations will resume at some point shortly after the UK’s departure. The aim of these negotiations would be to establish new trading arrangements for the future UK-EU relationship, and to mitigate against some of the problems a no deal Brexit would create.

All current no deal planning in the EU and in its member states to date has been limited to unilateral and temporary measures to accommodate UK citizens currently living in the EU to allow them to continue to reside and work in the EU member state(s). The same applies to some contingency measures concerning trade in goods, conformity assessments, transport and other areas. These are aimed exclusively at mitigating against the impact of a no deal Brexit but do not provide a basis for any future economic relationship between the two blocs.

If MPs are allowed to vote on the Withdrawal Agreement, and they approve the text, the EU will approve the technical extension until 22nd May (the day before European elections are held in the EU27) to provide the UK with the time needed to pass the Withdrawal Agreement Implementation Bill. This will also give the EU time to ratify the Agreement before the transition period takes effect. The UK will leave the EU on 22nd May but will remain part of the legal order until at least the end of 2020 under the Agreement. This period can be extended once. During this time the EU and the UK will negotiate another agreement on the new UK-EU relationship.

Scenario No 3: Long extension of Article 50 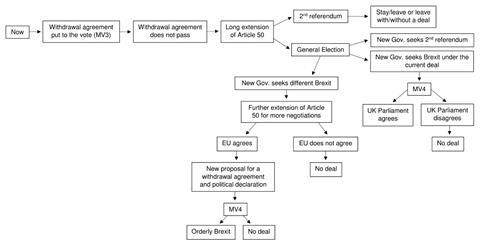 Should MPs vote against approving the Withdrawal Agreement, the short extension until 12th April will remain in place.

In this scenario it is likely that the efforts will be made to avoid a no deal Brexit. One possibility for breaking the impasse in Parliament is for a series of indicative votes to take place, as we saw on 27th March. These votes are designed to canvas opinion among MPs, in an attempt to ascertain whether a change of the UK’s official position to negotiations could garner the approval of MPs.

The UK may need to ask the EU for a longer extension, which the EU has said it will grant provided the UK takes part in the European elections at the end of May and that it provides a clear way forward in terms of the UK’s approach to the Brexit impasse. The UK could provide a clear way forward by stating that either a second referendum is to be held, or a general election has been triggered.

If a general election is called after a longer transition is secured, any newly-formed government will have all possible avenues open to it: it may accept the terms of the Withdrawal Agreement, leave without a deal, change the stated nature of the future UK-EU relationship or pursue a second referendum.

If a second referendum is to be held, the Government and Parliament would have to decide what question is to be asked of the public. Will voters be asked to choose between the Withdrawal Agreement (i.e. the terms of departure) and remaining a member of the EU? Or will it be between no deal and remaining in the EU?

In this scenario, the UK will have reached agreement by referendum on how to proceed (i.e. it will either be leaving or remaining in the EU). If the decision made by voters is to leave, the UK will need to ascertain the key characteristics of its future relationship with the EU. The UK will then leave the EU with the Withdrawal Agreement in place, it will enter into the transition period, and will begin to negotiate its new relationship with the EU.

Throughout this process, the risk of a no deal Brexit will persist.  This could happen where, following a general election, a new Government decides to pursue a no deal Brexit, or where that Government cannot reach an agreement which can then be ratified by the EU. It should be noted that the EU is unlikely to reopen the Withdrawal Agreement, i.e. the provisions on transition period and protection of citizens’ rights and the Northern Irish border. However, the UK can still change the text of the Political Declaration which set out the form that the future arrangements will take. For example, if the UK decided to choose a Norway Plus, or the Common Market 2.0, model of economic relationship (where it stays in both the customs union and the internal market) then the backstop would not need to be relied upon.

It should also be noted that the UK is bound by the time limits established by the extension of Article 50 and the transition period, meaning that all negotiations will take place within certain time limits.

Scenario No 4: Revocation of Article 50

Another possibility is that if the UK comes close to leaving the EU without a deal, there may be a majority in Parliament in favour of revoking Article 50 and remaining a member of the EU to avoid a no deal scenario. If Parliament instructs the Government to do so, it can be achieved unilaterally and does not require the approval of the EU27 states, as described in our earlier article on the relevant CJEU case written by Alyn Smith, MEP.

It should be noted that this does not require ratification in the UK either. Even though the Withdrawal Act prescribed the Brexit date as being 29th March, which has now changed to 11 April, the UK would continue to be bound by the EU law. According to the primacy of EU law, EU treaties take priority over the national law and the UK Withdrawal Act would need to be set aside.